First off, this weekend is going to be a blast!  Of course, Sunday is our annual reunion from 1-3 pm for all campers and staff that were at camp last summer.  Awesome!  But, tomorrow is also the day of our annual winter meeting for all of our leadership staff!  Just as awesome!  This is the meeting that has us brainstorming ideas for the upcoming summer as well as reviewing last summer.  Obviously, it is great when you can get so many people in the same room that just love talking about camp!  We might even come up with the Color War team names tomorrow.  Who knows?

Got to see a number of campers this week which as you know is my favorite thing to do in the winter.  Here’s who I saw…

I had dinner at Redstone in Plymouth Meeting, PA earlier this week with Austin Margulies.  Austin, who is in the 6th grade and will be a Freshman in Summer 2010 and back for his third summer, is doing great and he was so excited to be talking about camp throughout the meal.  Over the past few months, he’s been traveling a bit to New York and Connecticut to see friends and family and even went to Colonial Williamsburg for Thanksgiving, which he thought was pretty cool.  Of course, Austin is still rocking out on his guitar and can’t wait to reunite with his Rock Band mates at camp this summer.  He, too, was looking forward to the reunion.  Here’s a pic… Me and Austin having dinner at Redstone. The burgers there are really good!

Later in the week, I got to see Bradley and Matthew Weltmann in Melville, NY.  Bradley, going into his fourth summer and will be a Freshman in 2010, has been extremely busy with indoor and outdoor soccer seasons, basketball and tennis.  In the spring, lacrosse season will be thrown into the mix as well.  That night, Bradley was playing in his school’s Jazz Concert as he also plays the Alto Sax.  Bradley and I were happy to talk about camp with his younger brother, Matthew, who is in the 3rd grade and will be coming to camp for his first summer in our Junior Division.  Matthew also plays indoor and outdoor soccer, basketball, lacrosse and tennis.  This summer, he can’t wait for activities like the Banana Boat, the Summit and Waterskiing on the Lake as well as going on an Overnight and jumping in the Waterfall and Brad Henderson magic clinics.  Unfortunately, older sister Rachel wasn’t home as she was playing a game for her 8th Grade Volleyball team, but she will be back at camp for another summer as part of our Upper Senior Girls division.  Rachel has also been busy with soccer, basketball and tennis.  Here is picture… Me with Matthew (left) and Bradley Weltmann. We are kneeling in front of the centerpiece that was part of big sister Rachel's Bat Mitzvah. The centerpiece was all about camp!

I also saw Rachael and Abby Newman in Dix Hills, NY, both who are returning for summer #2 in 2010.  Rachael will be an Upper Inter Girl is in the fifth grade while Abby is in the third grade and will be a Junior Girl.  Both girls have been busy with their dance classes.  Rachael is practicing five different types of dance including ballet, hip-hop, lyrical, tap and jazz.  Both girls were set to perform this weekend in their holiday pageant recital “The Nutcracker.”  Over the holiday break, both girls told me how excited they were to get together with their bunkmates from Summer ’09.  Here is a picture… Me with Rachael (left) and Abby Newman.

Then, it was on to see new camper for 2010 and Lower Inter Boy Ryan Lefkowitz.  Ryan, who is in the 4th grade, lives in Syosset, NY.  These days, he is playing his guitar in his band called The Knockouts.  In fact, he will be playing in his music school’s “Big Gig” on January 31 in Farmingdale, NY.  While at his house, he was excited to show me the new song he just learned, Guns-N-Roses “Sweet Child O’Mine.”  No doubt, Ryan will be playing in our Rock Band program this summer!  When not playing, Ryan enjoys tennis, basketball and art.  This summer, he can’t wait for mountain biking, cooking and glass fusion.  His younger brother Devin, who is a future Canadensis camper and is the first grade, is busy with basketball, soccer, baseball, tennis and lacrosse.  Here is a photo… Me with Ryan (left) and Devin Lefkwitz. Ryan will be a Lower Inter in 2010 and Devin is a future camper.

As always, I love to get pictures of Canadensis get-togethers throughout the fall, winter and spring.  Seems like there have been many that have happened recently.  As promised, if you send me a picture, I will post it here on the blog.  First, Emily Kilman and Nicole Zibelman had a sleepover during the holiday break and they sent me a picture… Emily and Nicole will be Upper Inter Girls in 2010 and returning for their second summers.

A few days later, Emily also saw more of her bunkmates as a number of them met in New York City for lunch and then some craft projects.  In attendance were Bria Donohue, Zoe Hiller, Madelyn Levine, Rachael Newman, Julia Cohen, Emily Kilman and Ashley Shogan.  Unfortunately, weather and other travel plans kept some of their other bunkmates from attending but the girls wanted to give a shout out to Rachel Cebula, Taylor Schwartz, Alex Newman, Rachel Bresalier and Nicole Zibelman.  Here are two pics from that mini reunion. After lunch, it was time for some arts-n-crafts!

I also heard that 2010 Upper Inter Boys Alex Aronson and Tyler London spent close to an entire week together while over the holiday break.  Here is a picture of those two while hanging out…

Alex and Tyler hung out for a number of days during the holidays!

Finally, when you can’t come to the actual camp reunion, our staff get creative and have a reunion of their own.  Shawn Bolton sent me pictures of a staff mini reunion that took place in Michigan with counselors Rachel Kauffman, Nora Tkac, Justin Bruno, Sarah Smalley, Tony Davis, Chris Poag, Bridget Haley and Andi Riemersma. 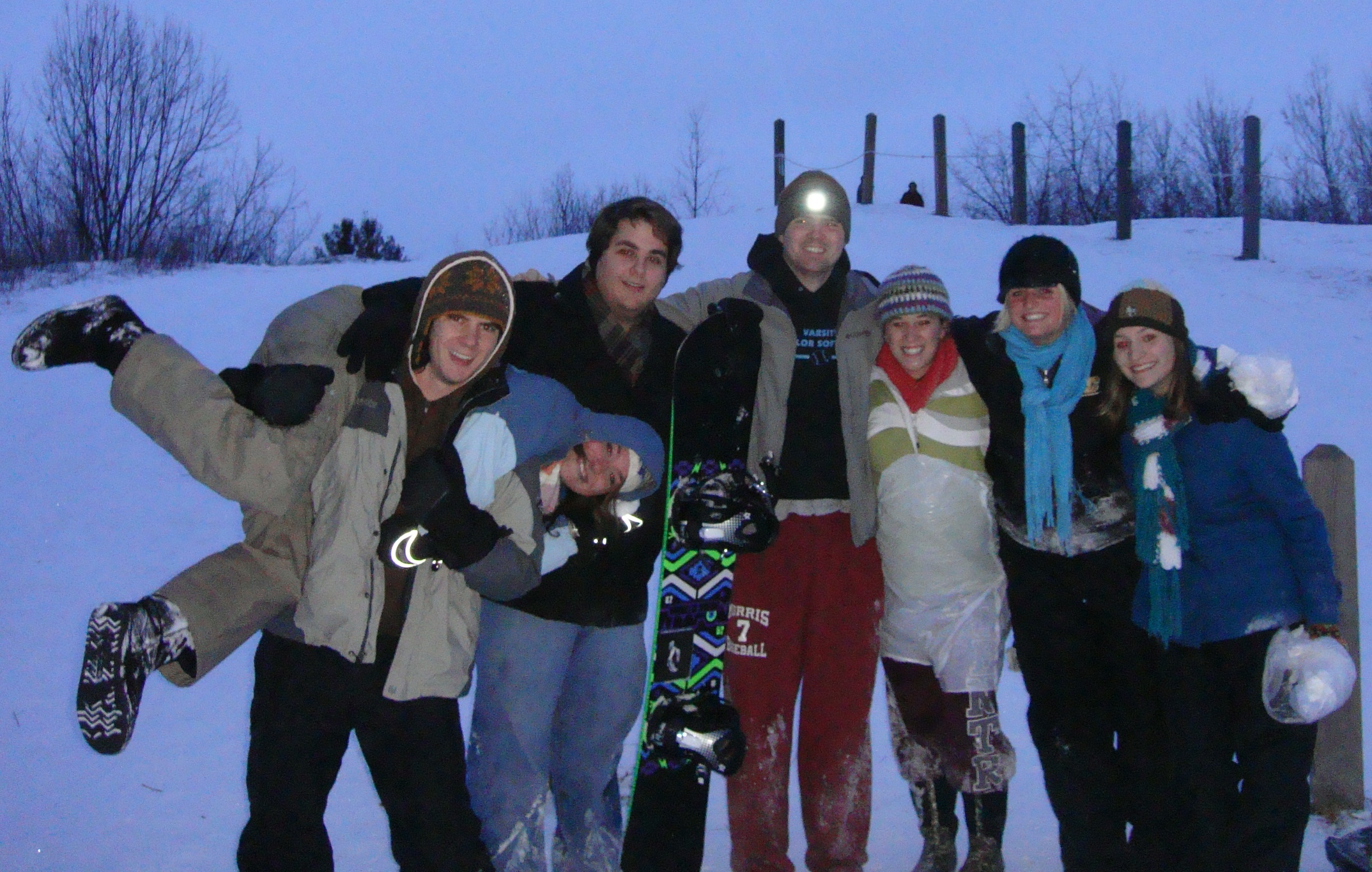 Some antics in the snow!

I also mentioned that I would give a shout out to counselor Pete Skurman, who got in touch with me over the past week or so, letting me know that things were going well at Amherst College.  Right now, he is up at school training for track with two-a-day practice sessions and getting in shape.  He is also a frequent reader of our blogs!  Pete can’t make it to the reunion, but wanted to say hello to everyone at camp.

With 2010 upon us, we are really now getting into gear for the upcoming summer.  I hope everyone enjoyed the latest newsletter that was posted this week.  If you haven’t seen it, go to the Media Room immediately and check it out!  A lot of good stuff in there about events coming up in the next few months.  In the next few weeks, our camp families will begin to receive mailings from us, including the 2010 Camp Spot clothes catalog, so be on the lookout for that.  We hope to see as many Canadensis families and Alumni at the 76ers game on Wednesday, January 13 and at the Knicks Game on Tuesday, February 9.  And, we will be having our new event, called Canteen on the Fly, on both February 21 and March 7.  More details on that to come!

But, first things first.  We hope this Sunday’s Reunion brings together so many familiar faces.  It’s going to be great!  I even know of a few people that will be traveling some pretty far distances to attend!  But, I’m not going to give away the surprise!