I hope all you in the northeast have made your way out of the snow.  I don’t know about you, but I am fed up with all of the white stuff.  Last week, here in north New Jersey, we got another 20+ inches.  It is enough already!

For this blog, I wanted to share with you many of the pictures from our first ever Canteen on the Fly on Sunday, February 21.  The idea was for camp’s year round staff to hit some of our neighborhoods and see just how many Canadensis campers and families we could meet.  Our journey started at noon in Merrick, NY at TCBY.  At 1:30, we were at the Carvel in Jericho, NY.  Finally, at 4:00 pm, we made our way to Livingston, NJ and Colaco’s Creamery.

First off, we were blown away by the turnout!  With the three locations combined, I think we must have seen close to 200 campers and families.  It was absolutely terrific to see so many people.  Every child that showed up had a chance to win Canadensis items from pens to patches to T-shirts.  Of course, anyone that showed up got free ice cream!  Here are some great pictures from the day… Cara was working the prize basket for all campers in attendance. 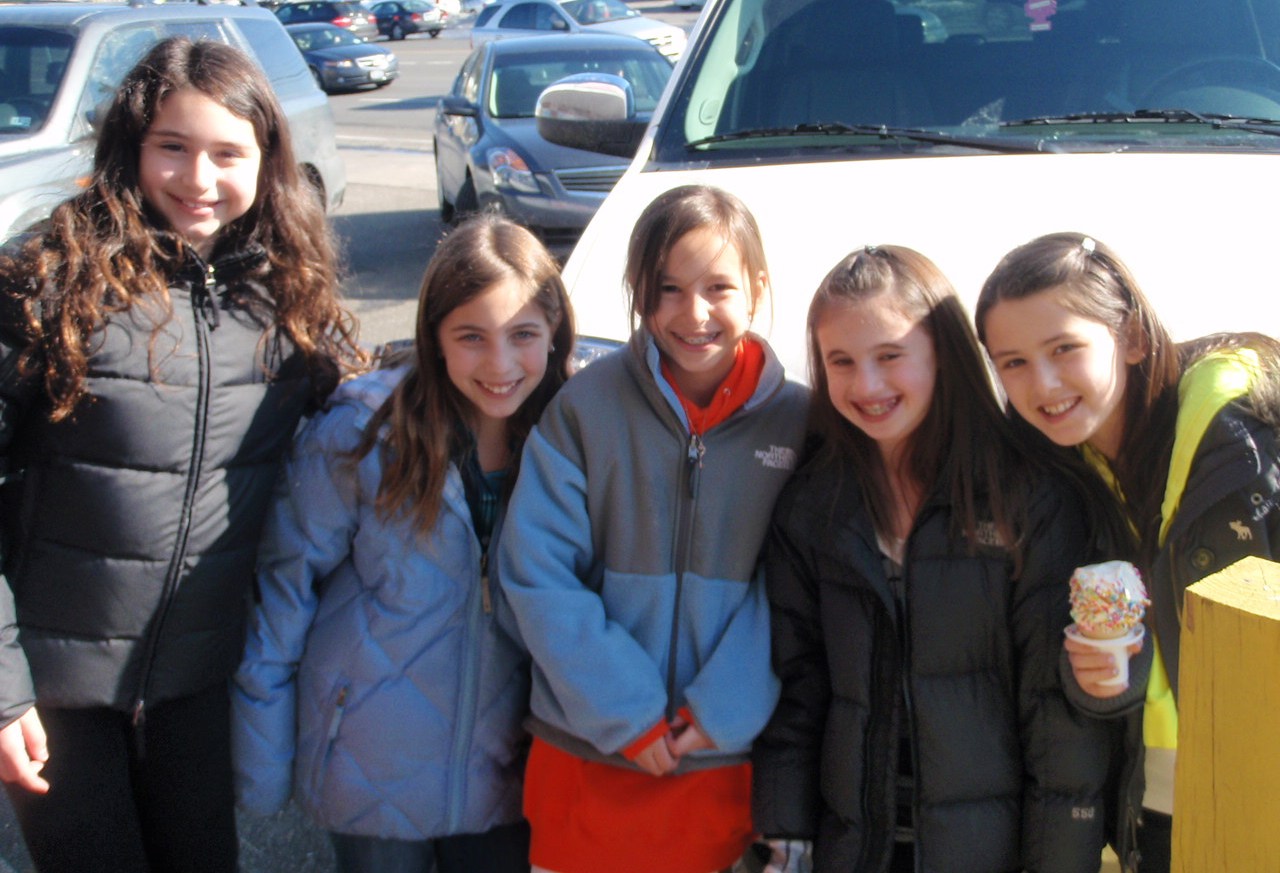 Julia, Madelyn, Ashley, Rachael and Zoe. The party got so big it spilled out into the parking lot! The Minion Boys were in great spirits! Pam and Rylie Frieder chillin' out.

Thank you for all those Canadensis campers, parents and staff that made the trip out to see us.  We had a great time!  We can’t wait to do it again this Sunday on March 7 when we hit Cherry Hill, New Jersey and Buck’s County and Main Line, Pennsylvania.

Of course, last week was another opportunity to get to see Canadensis campers in their homes.  In New City, NY, I saw Steven and Jason Haber.  Jason, also called Jay, is in the 3rd grade and will be in our Junior Division in 2010.  Jay plays on football, basketball and baseball teams in the fall, winter and spring.  He also enjoys participating in the town’s Mad Science program, which does cool experiments such as lighting balloons on fire and making slime.  This summer, which will be his first at Canadensis, he can’t wait to make new friends and Color War.  Big brother Steven, now in 7th grade, returns to camp for his third summer and will be in the Lower Senior division.  He also plays on football, basketball and baseball teams.  In 2010, he can’t wait to try to ride an 80 in Hondas and Color War.  Here is a pic… Me with Steven and Jason Haber.

In Irvington, NY, I met Brianna Havraniak and sister Maddie.  Brianna will be coming to camp for her first summer in the Lower Inter Girls division as she is in the 4th grade.  When not at camp, Brianna is busy with a number of different activities.  She ice skates and snow skis.  She plays lacrosse, basketball and tennis.  She plays the violin and will also be performing in her school play “Romeo and Juliet.”  Sister Maddie, a future Canadensis camper, enjoys break dancing and playing electric guitar.  She is also involved with lacrosse, basketball, soccer and snowboarding.  Here is a photo… Me with Brianna (right) and Maddie Havraniak and their dog Lottie.

In Ambler, PA, Pam and I went over to see the Greenes…Justin and Lauren.  Justin, who returns for his 3rd summer as Freshman Boy, is excited that his sister Lauren will be coming to camp for her first summer.  Lauren is in the 3rd grade and will be in the Junior Girls Division.  Lauren has been busy with her Lazers basketball team and gymnastics this year and soon she will be playing travel soccer.  She also loves playing with her dog, Mia.  This summer, she is looking forward to the Ropes Course and Zipline and all the activities at the lake.  Justin has been extremely busy with travel soccer.  His team, Montgomery United, placed third this past season in the top division.  Justin played midfield on the team.  He has also been playing a lot of tennis.  In 2010, he can’t wait to be on Freshman Hill, meet all the new staff at camp, do the Summit at the lake and winning Color War.  Here is a shot of the four of us… Me and Pam with Justin and Lauren Greene.

As I sit here on March 1, I would be remiss by not mentioning the fact that my Syracuse Orange (my alma mater) is currently the #1 basketball team in the country!  After defeating Villanova on Saturday night in front of 34,616 fans (a new regular season record for a home game), the Orange jumped ahead of Kansas, Kentucky and Purdue to claim the nation’s top spot.  Hopefully, they can go far in the college basketball tournament in a few weeks.