My family lives in Arizona, which means on my past several trips out to visit, I swing by the universities and recruit some great students to come join our staff team!  Three years ago, I met Alex Entrikin at the University of Arizona campus, and I cannot wait to give him a 3+ Year Staff Shirt this summer as he returns to camp as a Group Leader again!  It was great to catch up with him at In-N-Out Burger! And now there are just a few more weeks until the start of camp, and that means we are finalizing the summer program and hiring a few last staff members to join our awesome summer team!  After spending time with my family to celebrate Passover, I went up to the Northern Arizona University campus, and in the photo above I’m posing with the camp display! On campus, I got to meet up with some of our great staff from prior summers…including Rylie Backus (summer 2012), who is about to graduate! 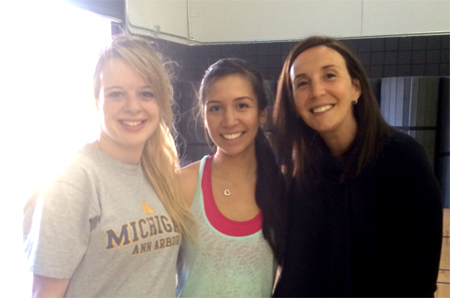 And I also got to see Kiersten Bolt & Emma Celoza (from summer 2013) and it was great to catch up! And while walking around at the South Street Spring Festival, I bumped into Lisa Eckenrode (summer 2013) spreading the word about the Metro Kids Club where she is currently working.  This was our second Philly run in this year! I’ve also gotten to see some of our awesome campers!  Including Shaina (left, will be a Lower Inter for her 2nd year at camp) and Sierra (right, will be an Upper Inter for her 2nd year at camp).  They are holding up canvas frames with pictures of their bunk from last summer.  They decorated them at recent bunk gatherings…and I love the blue and gold colors they chose!! And I also got to see their bunk mates Lindsay (left, will be a Lower Inter for her 2nd year at camp) and Anna (right, will be an Upper Inter for her 3rd summer at camp).  The girls are modeling our new camp sweatshirts with jersey applique that will be available for Careware purchase at camp on Open House day and Visiting Day – the girls love them, and describe them as “yummy”!  (Btw, their mom was the one who came up with the awesome canvas frame project above!).

Here’s a close up view of the sweatshirt…I’ll be wearing mine often in pre-camp when I move up after Memorial Day! We love seeing pictures of your camp run-ins too!  Above is a photo of 4 Canadensis Campers – from left to right we have:

Ashton (Upper Junior Boy), Jared (Lower Junior Boy), Max (Freshman Boy) and Jordyn (Upper Inter Girl).  It will be Jared’s first year at camp, but everyone else is returning for their 2nd, 3rd or 4th summer! Our camp forms were all due on Friday (May 9th, 2014) – but I recently saw this sign at a Walgreens…they’ve partnered with the America Camp Association (we are an ACA accredited camp!) to provide parents with an easy way to get medical forms done.  Consider it for Summer 2015! And finally…I wanted to share with you some awesome custom signs that just arrived for camp!  Can’t wait to see these hanging at camp this summer!!